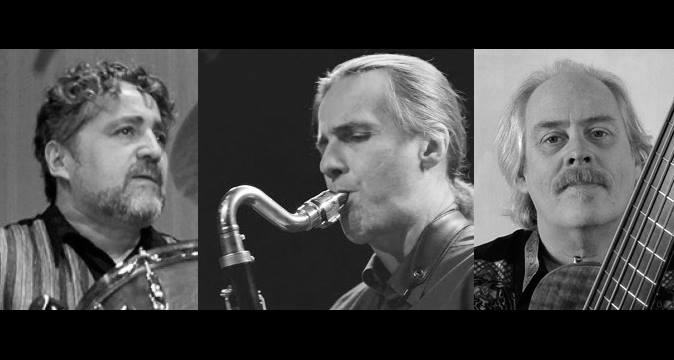 Ratatet plays modern electro-acoustic jazz/world music composed by drummer Alan Hall as well as arrangements of modern jazz standards. The band features a unique front line of bassoon, trombone, and vibes that moves between lyrical melodies and muscular grooves. Their music has been described by jazz critics as “scintillatingly different and passionate,” “beautifully textured electro-acoustic music laced with arresting sonorities,” and “a delight for younger, open-eared listeners.” You’ll hear music from their two CDs Heroes, Saints and Clowns and Arctic as well as new pieces.

This is a Guaranteed Fair Wage Fund event where each musician will be paid $150 in advance, regardless of ticket sales. Jazz in the Neighborhood makes this possible by subsidizing 40% of their pay. CJC guarantees the rest. For tickets and other information, please contact California Jazz Conservatory.

Dan Zemelman and Joe Warner bring their unique talents to the stage with solo and duo piano performances that feature original compositions and arrangements of jazz/pop standards.

With completely unique and differing styles, Zemelman & Warner each bring their loyalty and love of the piano to the table to make for a powerful and passionate listening experience. Warner brings his strong stride piano, straight-ahead, blues, and R&B influences while Zemelman brings his long-standing relationship with bebop, post-bop and modern jazz piano stylings.  Together, this will prove to be a most magical and memorable evening of jazz piano!

Dan Zemelman is a leader and innovator of jazz music in the San Francisco bay area scene.  He has performed/toured with Lee Konitz and John Lee Hooker, performed at major festivals and venues across the SF Bay area and has taught at Stanford Jazz Institute, Jazzcamp West and Lafayette Jazz Camp.  He brings his experience of many different genres of music and combines technique with heart and soul in a way that gives audiences a full, rich musical experience.

Joe Warner is one of the Bay Area’s brightest young talents. He frequently works with The Dynamic Miss Faye Carol and has worked with Stephanie Crawford, Marcus Shelby, Johnny Talbot, Mary Stallings, The California Honeydrops, and more.

The Brian Ho Trio is a dynamic group led by the aptly named Ho on the Hammond Organ. They will perform originals by Ho as well as standards — by composers like Bill Evans, Herbie Hancock, and even Fred Rodgers — that have been specially arranged for this combo. Ho has been influenced by the traditional jazz organ greats such as Jimmy Smith, Dr. Lonnie Smith, and Jimmy McGriff,  but he has his own modern take on the instrument. Throughout the night, you’ll be surprised and engaged by the twists, turns, and emotions of this driving trio.

House of Faern is a quartet unique not only for its instrumentation. Each of its four members— alto saxophonist Beth Schenck, violinist Jenny Scheinman, guitarist Matt Wrobel, and pianist John Wood— brings a distinct compositional voice and an egalitarian instinct that combine toward sublime, conspiratorial effect.

Separately they’ve collaborated with artists as diverse as Bill Frisell, Henry Threadgill, Ani Difranco and The Black Keys, not to mention dozens of creative ensembles across the globe.

Founded on the banks of the Mattole River and named for a special rock, their spirit reflects the complexities of wild landscapes. Singularly conceived compositions become freshly charted maps. With little hesitation, we find ourselves bounding across their valleys, trustfully pushing and pulling down the river trail, discovering peaks and caves and occasionally even routing underneath toward those hidden, unmarked sides of the map.

The group will feature standards and jazz classics, stretching outside the typical formula trio format. Trumpeter Mario Guarneri will sit in with the band. 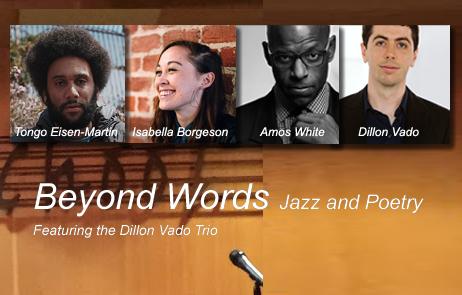 Beyond Words: Jazz + Poetry is a monthly poetry and jazz show that explores the intersection of the oral poetic image in evolution with jazz music. Beyond Words features poets, authors, singers and jazz musicians. It is a collaboration of San Francisco Bay Area haiku poet, author and impresario Amos White, and renowned jazz musician and composer Dillon Vado.

Amos White is an American haiku poet and author of The Sound of the Web: Haiku and Poetry on Facebook and Twitter, recognized for his vivid imagery and breathless interpretations. He was a Finalist in the NPR National Cherry Blossom Haiku Contest 2013 and has been published in The Wittenberg Review, Oakland Review, Bones Journal, San Francisco BayView, Area 17, World Haiku Association Anthology.

Dillon Vado is a drummer, vibraphonist and educator in the San Francisco Bay Area, and a graduate of the California Jazz Conservatory. He regularly performs on vibraphone with Alan Hall’s Ratatet, on drums with The Electric Squeezebox Orchestra, and leads several of his own projects.

Pianist and composer Dahveed Behroozi’s focus is on jazz, classical, and new music. His playing has been described as, “highly expressive, lyrical and colorful.”

Bassist and composer Jeff Denson is an acclaimed performing musician and a highly respected educator. Currently leading or co-leading four distinct ensembles, he has toured extensively throughout the U.S. and Europe. He is also a full professor at the California Jazz Conservatory, and serves Outreach Director, nurturing young musicians.

San Francisco poet Tongo Eisen-Martin is a movement worker and educator who has organized against mass incarceration and extra-judicial killing of Black people throughout the United States. His latest curriculum, We Charge Genocide Again , has been used as an educational and organizing tool throughout the country. His book of poems, Someone’s Already Dead, was nominated for a California Book Award.

Isabella Borgeson is a queer, multiracial Filipina American poet and teaching artist from Oakland, California whose poetry is an artistic extension of her activism and community organizing. She has received fellowships from Voices of Our Nation Art Foundation and the Poetry Incubator through Poetry Foundation and Crescendo Literary, and her work has been featured on CNN, NBC, Inquirer, and the Guardian.

George Brooks is a saxophonist and composer, acclaimed for successfully bridging the worlds of jazz and Indian classical music, founding seminal Indian fusion groups like Summit with Zakir Hussain, and Bombay Jazz with Ronu Majumdar and Larry Coryell, and the Raga Bop Trio with Steve Smith and Prasanna. Kai Eckhardt appears on Brooks’ Summit and Spirit and Spice recordings and has performed with Brooks, Steve Smith and Zakir Hussain in the US, Europe and Asia. Northern California native Frank Martin is the pianist on George Brooks’, Spirit and Spice recording and has performed with Brooks throughout the Bay Area. He has performed with an incredible range of artists, from Lady Gaga to Stevie Wonder.

Emerging Artist Amelie Hinman will be featured in this performance. She is a hand percussionist who has studied with Carlos Caro, Jake Nissly, Herwig Steiger, and Gerhardt Reiter.