NoCoasters is an innovative jazz piano trio comprised of three top-call musicians who all escaped their Midwestern (i.e. no coast) upbringing for a life in the San Francisco bay area: Lee Bloom, piano; Brandon Essex, bass; and Carrie Jahde, drums. They will be joined by Lincoln Adler on soprano sax. Together they take on jazz, Latin, New Orleans, blues and even country standards and reinvent them in ever changing ways. Their approach is highly improvisational, playful, and communicative, and their live performances are always fresh and exciting.

This is a Guaranteed Fair Wage Fund event where each musician will be paid $150 in advance, regardless of ticket sales. Jazz in the Neighborhood makes this possible by subsidizing 40% of their pay. Bird & Beckett and the Jazz Philanthropists Union guarantees the rest. For tickets and other information, please contact Bird & Beckett. 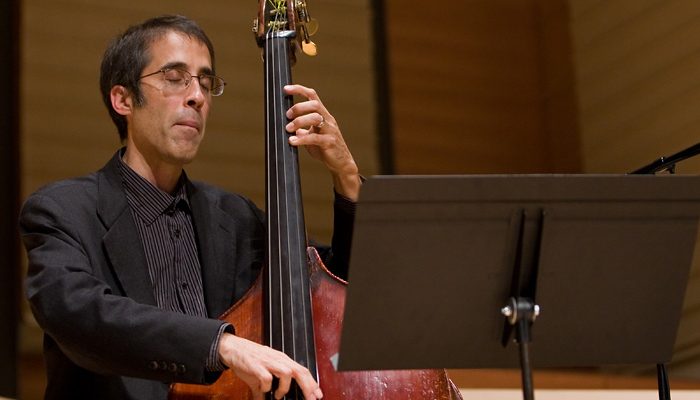 John Wiitala describes this meeting as “one of my absolute favorite trios that’s never played together.” In addition to Wiitala on bass, the trio features Randy Porter on piano and Hamir Atwal at the drums. Wiitala and Porter have played, recorded and toured together for over 25 years. Wiitala plays on Porter’s Grammy-nominated release “Porter Plays Porter, ” featuring the legendary Nancy King. Over the past eight years, Atwal has played with Wiitala in various ensembles led by Patrick Wolff and Erik Jekabson. And Porter and Atwal play in Madeline Eastman’s band. They’ve finally put this particular trio together, and are concentrating on listening and welcoming the music in.

Discover musical excitement with Bill Belasco’s Aguabella. Performing all original charts by noted arranger Jules Rowell, this band combines the best elements of jazz with Afro Cuban rhythms. The interplay between the drums of Bill Belasco and the congas of Raul Ramirez is remarkable with danceable effects. This band is very groove oriented with appeal to all ages. Outdoor seating, no admission charge.

David James and Beth Custer have been working together in each other’s ensembles for over a decade. They’ve now united forces to lead a new group performing their songs and instrumentals: funky, jazzy, introspective, political, saavy. Combining their voices and guitar and clarinets with a rock solid rhythm section and the heavenly vocals of Diana Mangano this is a group to watch out for.

The Susan Sutton Trio is a marvel of melodic invention and subtle interplay in the classic piano trio format, with the added feature of Ms. Sutton’s swinging vocals. Performing the standard jazz repertoire along with original compositions by Sutton and those of famed pianist and composer Bryce Rohdes, the trio provides great textural and dynamic variety and is always highly listenable. The trio features Piro Patton on bass and Kendrick Freeman at the drums.

After nearly a decade of playing together in a variety of contexts, saxophonist Kasey Knudsen, bassist Miles Wick and drummer Jon Arkin unite as a trio for the first time to delve into the limitless possibilities of this pared down configuration. The group will explore a diverse array of original compositions, freely improvised vignettes, and a few choice standards to create a sound that is identifiable, at times abstract, but always immediately accessible.

Kasey Knudsen, a graduate of Berklee College of Music, has been a vital part of the Bay Area music community since 2002. In addition to leading a number of her own ensembles, she has performed and recorded with a wide range of artists, including Ben Goldberg, Tune Yards and Charlie Hunter. Active as an educator, she is currently a faculty member of Sonoma State University, the Stanford Jazz Workshop, the Lafayette Jazz Workshop and the California Jazz Conservatory.

A graduate of the University of Miami, Jon Arkin is an in-demand freelance drummer with many notable local, national and international artists. His drumming style has been sought out as much for his versatility as for his uniqueness.  A believer in the power of listening, grooving, dynamic balance, and attunement, his collaborators attest to his ability to suit the music of the moment.

Miles Wick is a creative musician and teacher with ties to the San Francisco Bay Area and New York City.  By trade a jazz bassist, Miles contributes to a number of different musical projects in a variety of styles from folk to rock to improvised.  He can also be found singing his own songs, which have been performed on both coasts and internationally. Wick holds a B.A. in music from Sonoma State University.

Joining the trio will be emerging artists Gio Mendez and Ari Silberman. Both are saxophone students of Knudsen’s at Sonoma State University.