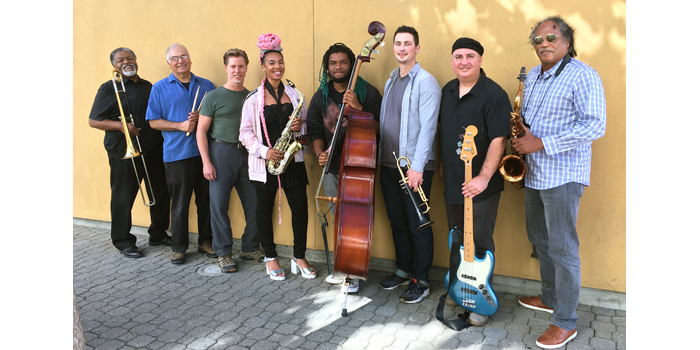 Wednesday, May 30, 7:30 pm at Rendon Hall at the California Jazz Conservatory

Harpist Destiny Muhammad’s sonic journey ventures into the soul of the Celtic Realm and then delves into works of American jazz composer legends Alice and John Coltrane and jazz harp genius Dorothy Jeanne Thompson Ashby. Destiny invites strings in from her group Strings of a Nubian Groove (SONG) to reimagine the tone of her jazz heroes’ music and adds her own original compositions to the mix. Joining Destiny will be Leon Joyce, Jr. on drums, Chico Lopez on bass, and Tarika Lewis and Sandy Poindexter on violin.

Joining the Project will be Emerging Artist Tai Min. Though she’s not yet in high school, Tai is already a familiar presence to Bay Area music fans as a vocalist who can seize and hold an audience’s attention from the region’s biggest stages. Possessing a powerful voice and a passion for soul, jazz and pop music, she combines deep natural talent with a rigorous work ethic. 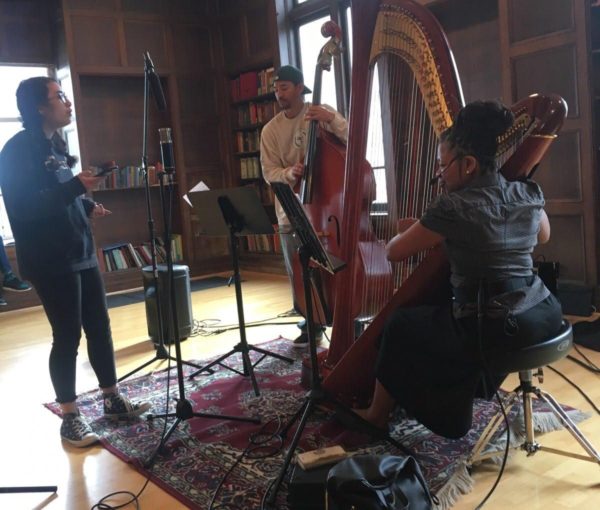 Wednesday, May 23, 7:30 pm, at Rendon Hall at the California Jazz Conservatory

Grammy nominated composer, pianist, and producer PascalLe Boeuf’s works range from modern improvised music to cross-bred classical with production-based technology, with a polyrhythmic approach to chamber music. Le Boeuf returns to the Bay Area for a special performance of his large-scale work “Ritual Being,” a 9-piece jazz/classical collaboration between San Francisco’s Friction String Quartetand LeBoeuf’s own quintet. This work explores the propitious and disastrous rituals of the manifestation of human behavior at micro/macro levels and asks what happens when we project our individual behaviors and routines onto the whole of our species?

“Ritual Being” was made possible by support from Chamber Music America’s 2015 New Jazz Works program funded through the generosity of the Doris Duke Charitable Foundation. 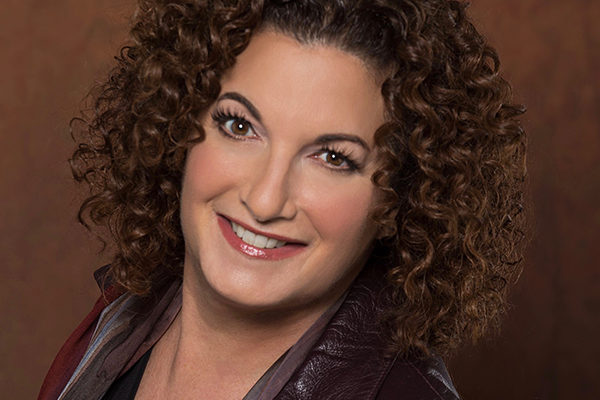 Friday, May, 11 at 6pm, Copperfield’s Books in San Rafael

Kat Parra is an award-winning jazz vocal musician, composer, lyricist and arranger with an international perspective. In 2006, she quit her job as a graphic designer at Cisco Systems, Inc. to pursue her passion for music and she’s never looked back. Since then she has performed in Amsterdam, Brazil and Mexico as well as top-tier venues throughout the United States, earned the designation of “Best Latin Jazz Vocalist of 2010 and 2008” by Latin Jazz Corner, and received a 2008 nomination for “Latin Jazz Album of the Year” from the Jazz Journalists Association. She has created an engaging and unique repertoire with fresh and exciting new arrangements. Kat is as comfortable singing the American songbook as she is singing songs from across Latin America, the Caribbean and beyond. She sings fluently in English, Spanish, Portuguese and Ladino (Judeo-Espanyol).

Kat is celebrating the release of her 5th CD as a leader, SONGBOOK OF THE AMÉRICAS. In addition to Parra’s original music and lyrics, the CD pays tribute to women composers from North, Central and South America. With this multi-lingual and multi-musical experience, Kat Parra is able to transport her audiences to an exciting and vibrant journey of world and latin music.

This free concert is a collaboration between Jazz in the Neighborhood and Copperfield’s Books, which provides use of their space. Though there is no income from ticket sales, Jazz in the Neighborhood pays each musician a guaranteed fair wage. The concerts are made possible through contributions from our JITN membership, audience members, and sponsors such as the Magic Flute and Bananas at Large.

Wednesday, May 9, 7:30 pm at Rendon Hall at the California Jazz Conservatory

LET’S CALL THIS is a new meeting of three improviser-composers who have developed singular voices as longtime members of the Bay Area creative jazz community. Saxophonist Hafez Modirzadeh joins bassist Lisa Mezzacappa and drummer Vijay Anderson to explore original compositions, structured improvisations, and conceptual flights, born from a shared sense of curiosity and possibility. Modirzadeh is known for developing a unique poly-tempered approach to jazz based on the music of Iran. Anderson composes tightly knit music with interweaving melodic lines and a driving momentum. Mezzacappa’s compositions combine asymmetrical grooves with sonic abstractions and free zones of exploration. This performance is a special opportunity to hear the debut of this inventive and adventurous new trio.

Lisa Mezzacappa is a Berkeley­-based composer, bassist, and bandleader. Called “one of the most imaginative figures on the Bay Area creative jazz scene” by The Mercury News and “a Bay Area treasure” by KQED, she has been an active part of California’s music community for more than 15 years. Mezzacappa writes music for groups from duo to large ensemble, acoustic and electric, and has collaborated with film, dance, sculpture and installation art. Recent projects include ORGANELLE, a chamber suite for improvisers; Glorious Ravage, an evening-length song cycle for large ensemble and films; and TOUCH BASS, a collaboration with choreographer Risa Jaroslow for three dancers and three bassists. avantNOIR, a suite of compositions for jazz sextet, was released on Clean Feed records in 2017 and earned 4 1/2 stars in Downbeat Magazine.

Saxophonist/theorist Hafez Modirzadeh has performed, recorded, published and lectured internationally on original cross-cultural musical concepts which include “Convergence Liberation” (in Critical Studies in Improvisation, 2011), “Compost Music” (in Leonardo, 2009), “Aural Archetypes” (in Black Music Research, 2001), as well as “Chromodality” (for Wesleyan University, 1992). Twice an NEA Jazz Fellow, Modirzadeh received a Senior Fulbright Award in 2006 to work with Flamenco and Gnawan traditions in Andalucia and Morocco, and again in 2014, to research Turkish Makam harmonization in Ankara. He is a Professor of Creative/World Music at San Francisco State University.

For more information about the artists, visit their sites:

Pianist Edward Simon – a native of Venezuela who has made a name for himself over decades in America as a jazz pianist, bandleader and composer-arranger, along with being a Guggenheim Fellow and member of the hit SFJAZZ Collective – has created fresh, supple interpretations of melodies from all over Latin America. His latest album Latin American Songbook won him an NAACP Image Awards for ‘Outstanding Jazz Album’. For this performance, Simon’s trio features two of the most distinguished players from the Bay Area: drummer Alan Hall and bassist Peter Barshay, whose subtly virtuosic performances brim with lyricism, color and groove.

The New York Times has praised Simon’s “light, warm touch” as a pianist, while the Jazz Journal International singled out “his deep emotional statements.” Listen to samples of Simon’s latest album here.

Contemporary jazz pianist, keyboardist and composer Peter Horvath performs with his dynamic trio featuring Jeff Chambers on bass and Jason Lewis at the drums. The trio play Peter’s original compositions, along with arrangements of the standards.

Peter Horvath has been perfecting his craft since the age of six. He attended the Bela Bartok Conservatory of Music in his native Hungary, then attended the Vienna Conservatory of Music. He moved to the United States in 1983, where he studied at the Berklee College of Music. He has since performed and recorded  with a long line of world-class artists. ​Peter is currently on faculty at the California Jazz Conservatory, Saint Mary’s College of California and Stanford Jazz Consortium. 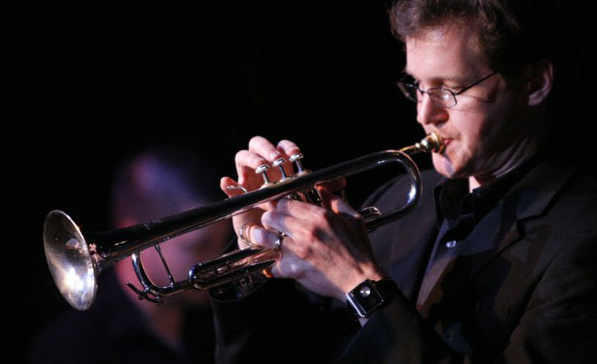 Wednesday, May 2, 7:30 pm at Rendon Hall at the California Jazz Conservatory

The Erik Jekabson Quintet performs original music by trumpeter Erik Jekabson.  The band plays modern jazz with funk, fusion and latin jazz influences.  Much of the music is groove-oriented and has lyrical melodies, but it also has modern and sophisticated harmonies. In addition to Jekabson, the band features Dave Ellis (saxophones), Dave MacNab (guitar), John Wiitala (bass), and David Flores (drums).

Erik has six CDs out under his own name: his most recent album is “Erik Jekabson Quintet” (2017) on the Wide Hive Record Label. Erik also co-produced and played on four other recordings which are widely available: The Electric Squeezebox Orchestra’s “The Falling Dream” and “Cheap Rent”, “Vista: the Arrival” and “New World Funk Ensemble”. He’s recorded as a sideman on numerous other jazz recordings, as well as doing session work in many other genres of music and on movie and video game soundtracks. He’s spent time on the road with Illinois Jacquet, John Mayer, Galactic, and the Howard Fishman Quartet, and has performed at such notable venues as the Concertgebouw in Amsterdam, the Algonquin Room, the New Jersey Performing Arts Center, Madison Square Garden, the Tonight Show with Jay Leno and Late Night with David Letterman. When Erik Jekabson isn’t playing and composing, he’s teaching a wide variety of students and running the Young Musicians Program at the California Jazz Conservatory.