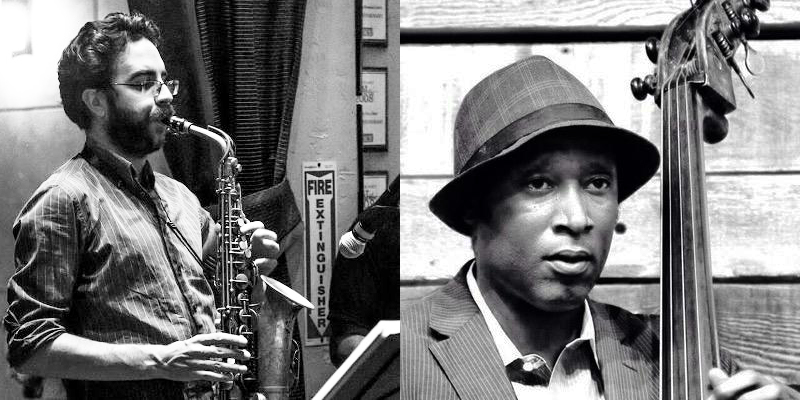 Charlie Gurke is one of the most in-demand baritone sax players in the area. He’s a regular in the Electric Squeezebox Orchestra sax section and has also performed with the Contemporary Jazz Orchestra, the Realistic Orchestra, and other Jazz Mafia projects. Gurke teaches Stage Band at Laney College and San Francisco’s School of the Arts and is the music director for We Players theater company.

In addition to being an educator and activist, Marcus Shelby is a bandleader, composer, arranger, and bassist, who has been a supporter of Jazz in the Neighborhood since its inception. Over the past 25 years his work and music has focused on sharing the history, present, and future of African American lives; on social movements in the United States of America; and on early childhood music education. Shelby is currently a member of the San Francisco Arts Commission. His recent work includes Beyond the Blues: A Prison Oratorio, an original composition for big band orchestra commissioned by the Yerba Buena Gardens Festival, which premiered in 2015.

Max Miller-Loran is a graduate of the Berklee College of Music in Boston. He performed extensively in the New England area in both jazz and hip-hop before moving back to his hometown of San Francisco. He studied with Greg Hopkins, Tiger Okoshi and Hal Crook. He currently performs regularly with Blind Willies, The Getback, George Watsky, Kev Choice and many others. He strongly believes that all musical styles are valid and teaches with this philosophy in mind.

Adam Shulman has been a staple of the San Francisco Jazz scene since he moved to the city in 2002. Before the move, Adam was a student at UC Santa Cruz where he studied with the great pianist Smith Dobson and the trumpeter/arranger Ray Brown. He received his degree in classical performance under the tutelage of the Russian pianist Maria Ezerova.

Born and raised in Brooklyn, New York, Michael Mitchell has found a new home behind the drums in the Bay Area. He is now a Teaching Artist for SFJAZZ as well as the Stanford Jazz Workshop, and the director of Oakland Public Conservatory’s Frederick Douglass Youth Ensemble. Mitchell can be seen performing regularly with vocalist and trombonist Natalie Cressman, Steven Lugerner’s JACKNIFE, and at San Francisco’s Black Cat as a part of the Black Cat Trio.

The Emerging Artists for this event will be young musicians from the SF Community Music Center Teen Jazz Orchestra.