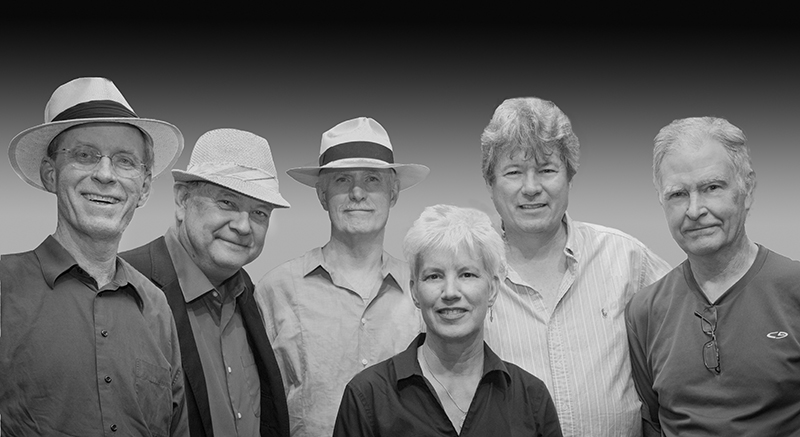 Join with us as we celebrate the 20th anniversary of Jazz Caliente. Founded by Lee Waterman and Tommy Kesecker in 1997, the band performs Afro-Cuban and Brazilian jazz featuring original compositions by Waterman as well as arrangements of jazz and Latin masters such as Miles Davis, Duke Ellington, Wes Montgomery, Tito Puente, and Sergio Mendes. Joining Waterman on guitar and Kesecker on vibes will be Alex Murzyn on flute and reeds along with bassist Bill Lanphier, percussionist Michaelle Goerlitz, and drummer Bill Belasco.

Trademarks of the Jazz Caliente style are tight arrangements and infectious grooves. Basing its chordal foundation on vibes and guitar produces a brighter tonality and allows more space inside the music than with a traditional piano-based format. Their latest CD release is Olhos Verdes.

Guitarist Lee Waterman also arranges and composes for the group. In addition to Jazz Caliente, he leads several other combos that perform in a variety of different styles. His classic jazz styles were developed through study with Warren Nunes, augmented by percussion studies for multicultural genres. Waterman has performed with sax great John Handy and has opened for many headliners, including Tito Puente and Pancho Sanchez. “He skillfully creates melodic statements that dart in and out of a variety of rhythmic contexts. His obvious affinity for Afro-Cuban and Brazilian rhythms brings a refreshing point of view to his Jazz-based music,” says KCSM’s Jesse Chuy Varela.

Vibraphonist and marimbist Tommy Kesecker has long delighted audiences with his virtuosic performances. In fact, he began his career playing drums at San Rafael’s Belrose Studio Theater for its Vaudeville Showcase. Since then, he’s has performed with Zakir Hussain, Larry Vuckovich, Jim Campilongo, George Brooks, Michael Feinstein, Diana Krall, Joel Gray, Echo and the Bunnymen, and Mannheim Steamroller. He co-leads the Klobas/Kesecker Ensemble and is an active music educator. Said Jesse Hamlin of the SF Chronicle, Kesecker is “a cross between Milt Jackson, a Jamaican steel drummer and a Balinese gamelan player.”

Bassist Bill Lanphier is notable for his mastery of a wide range of genres and styles: rock, pop, Balkan, blues, bluegrass, funk, fusion, latin, and jazz. He hit it big touring with Madonna, later touring and recording with the Rippingtons. He’s also performed with Tom Scott, Rickie Lee Jones, Michael Bolton, Kenny G, Art Garfunkel, and the Chicago Symphony Orchestra, among many others. He plays both electric and acoustic bass as well as dabbling with his first instrument, the drums.

Drummer Bill Belasco has an energetic and propulsive style that is beautifully balanced by his impeccable sense of timing and sound color. His mastery of samba, bossa nova and baiao rhythms of Brazil, as well as many Afro-Cuban, jazz, and popular idioms has made him one of the top drummers on the San Francisco music scene. He’s performed with such diverse groups as Majestic Swing, the Sharman Duran Trio, the Dave Miller Trio, the Pickle Family Circus, and the Mike Vax Big Band.

To say Michaelle Goerlitz is a percussionist is to say: she plays congas, bongo, timbales, shekere, cajon, drumset, udu, bata, pandeiro, tamborim, repinique, zabumba, berimbau, surdo, cuica, dumbek and “auxiliaries” like shakers and triangle. She’s versed in Brazilian, Afro Cuban, Venezuelan, Peruvian and Middle Eastern rhythms as well as American jazz, R&B, and funk. She was a founding member of the Blazing Redheads and Wild Mango and has performed with a veritable who’s who of artists in the Bay Area. Goerlitz is a sought-after teacher and has the distinction of being the first female teacher at California Brazil Camp in 2004, and being named a Downbeat magazine Rising Star in 2007.

Sitting in for a few tunes as a JITN Emerging Artist will be vibes player Justis Jones.

This free concert is presented as a collaboration between Jazz in the Neighborhood and Copperfield’s Books. We are grateful for the monetary support of  our members, supporters, and advertisers that make these concerts possible.