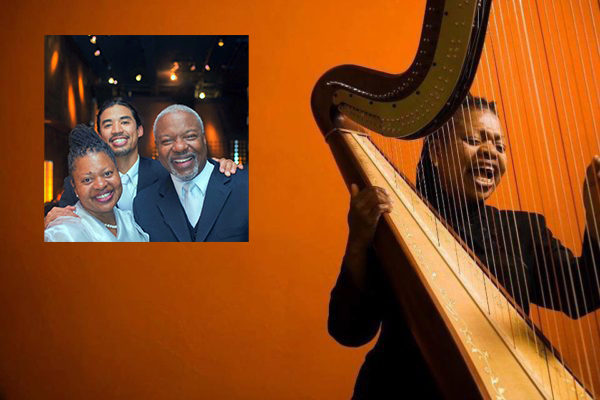 Thursday, February 28, 7:30 pm at Piedmont Center for the Arts

Destiny Muhammad, a jazz harpist and vocalist who follows in the footsteps of Dorothy Ashby and Alice Coltrane, brings her stellar trio to the Piedmont Center for the Arts for an evening of soaring yet down-to-earth jazz. Chico Lopez performs on bass with Leon Joyce, Jr. on drums. Her signature genre ranging from Celtic to Coltrane has a cool and eclectic sound with the feel of jazz and a touch of storytelling to round out the sonic experience. Whether interpreting jazz standards or playing her original tunes, Muhammad and her trio turns every piece into a soulful adventure.

Jazz in the Neighborhood’s Emerging Artist will be Sean Huang, who performs in  the SFJazz High School All-Star Big Band as the alternate alto sax player.

The 230 Jones Street, Local 6 Literary Jazz Band — aka The Chuck Peterson Quintet —  are five musicians whose history on the local jazz scene dates back 60 years to the very early 1950s.

The band was originally formed by multi-instrumentalist Chuck Peterson (tenor sax, baritone sax, flute), who was a union activist in his prime years (the 1950s and 1960s), hence  his nod to the address of Local 6 of the American Federation of Musicians, where he and his cohorts made sure they could make a decent living at their craft by banding together and defining and defending their rights.

It was Chuck who got jazz going at Bird & Beckett on a weekly basis in October 2002. He volunteered that he’d provide musicians if we’d provide the venue and pay what we could. We both kept our word. Chuck is retired now, living up in Petaluma, and rarely makes an appearance anymore, but this band comprises musicians that were friends and colleagues of his all through the years.

Originally announced for February 8, the event was cancelled at the last minute due to rain. 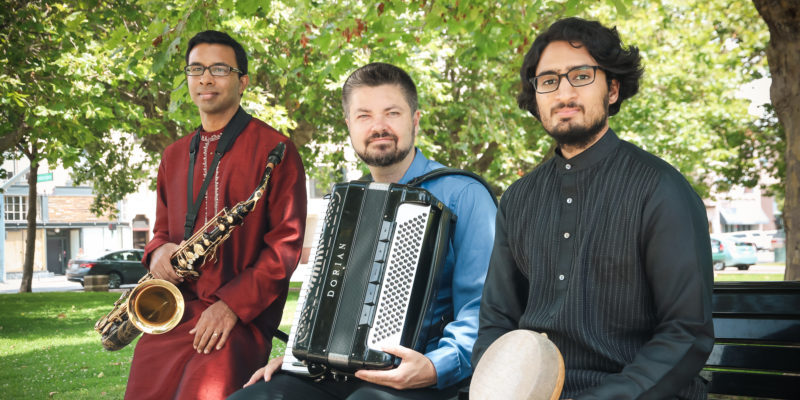 The Alaya Project is the essential bridge between the intricate Carnatic style of Indian classical music and contemporary jazz and funk. Born in the cultural bastion of Oakland, Alaya explores new textures and perspectives built over two decades of friendship, dialogue, and musical immersion across genres and continents. The driving, hybrid grooves of Indian percussionist and drummer, Rohan Krishnamurthy, the soulful ragas and melodies of Prasant Radhakrishnan on saxophone, and the harmonic bedrock of Colin Hogan on piano and accordian come together to embody the permanence of a changing soundscape. Their guest artist will be Roopa Mahadevan, a Carnatic singer who is known for her powerful and emotive voice.

Jazz in the Neighborhood’s Emerging Artist will be violinist Eva Piontkowski.

Dahveed Behroozi is a pianist and composer, whose interests encompass jazz, classical, as well as new music. His playing has been described as highly expressive, lyrical and colorful by numerous publications nationwide. Active as a leader and a sideman in the Bay Area, Behroozi also enjoys a national and international career. His first record, Games, was released in 2012.

The career of Ben Goldberg has been shaped by a relentless pursuit of musical truth across many genres and styles, leading John Zorn to call him “one of the greatest clarinetists I’ve ever heard.” Also a composer, Goldberg has been associated with many projects, including New Klezmer Trio, Unfold Ordinary Mind, Go Home, the Tin Hat Trio, Clarinet Thing, and the Ben Goldberg School.

While at Berklee College of Music, Hamir Atwal immersed himself in jazz and improvisation and quickly found ways to adapt his drumming to different genres. Critics describe his style as fresh and conscientious, and he is known for his touch and sensitivity to any music he plays. Atwal’s ensembles include Invisible Guy Trio and Tune-Yards.

Vocalist Kelsey Wu will join the trio as Jazz in the Neighborhood’s Emerging Artist.